Spectratech OEG-16H has become to be able to measure the pulse wave component of blood flow changes at a fairly good SNR. Then, it obtained the pulsatile Oxy-Hb and Deoxy-Hb components, and calculates the oxygen saturation following the principle below. Since it differed from the formula used by pulse oximeter, Apparent SpO2 (Apparent oxygen saturation) was named.
It is expected that the argument about the change of arterial oxygen saturation in a brain localization can be probably advanced while it has not been really discussed in fNIRS environment due to the poor SNR of pulse wave signals. However, ApparentSpO2 is displayed in %, but it is not a calibrated value like a pulse oximeter. At this moment, it has not reached the level at which the accuracy and the correctness can be discussed.
As a value, you may still use it as a mere standard, and please make use of it within understanding whether ApparentSpO2 tends to increase or to decrease at a specific time. 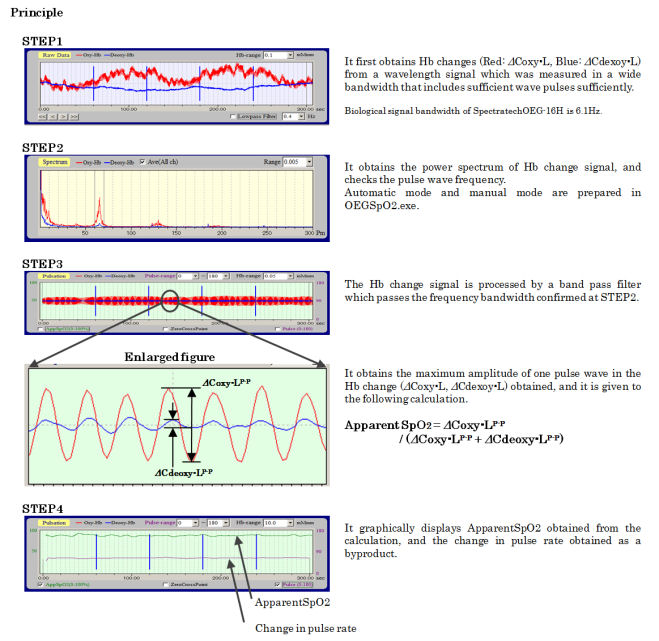 Precaution: Although the SNR has become good enough, there is a limit. Generally in the brain localization near the hair outside of the prefrontal area, the required SNR may not be obtained. In such case, with the present algorithm, the indicated value of ApparentSpO2 gets close to 50%. Please understand it, which will be improved further in the future.