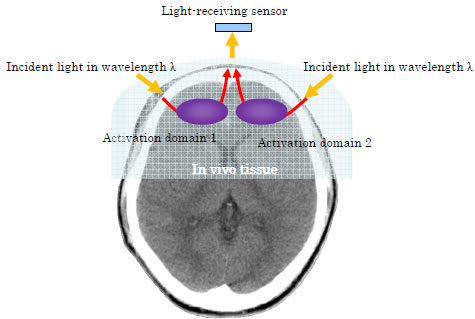 When being tried to obtain the multipoint biological information at the same time, it can separate off where the light that reached a sensor came from. There, the light modulation technology is used. The equipment has adopted the spread spectrum multi-modulation method for the light modulation, that is one of the latest digital technologies.

TDMA is a method that controls each light source at the micro level, and a light source in a specific place emits a light at a certain moment. The sensor side where a light was received can separate off the light that came from a specific point by controlling the time. Though it is extremely advantageous in easy-to-use as a modulation method, it still has the disadvantages in easily influenced by turbulence light, and limitation to the biological signal bandwidth for multiple channels.

FDMA method light-modulates the light of each source at individual frequency to emit it. The sensor side where lights were received can separate off the lights that came from each point by separating them off with a frequency-dependent filter after changing the optical composite signal from each point into an electrical signal. It becomes less influenced by the turbulence light compared with TDMA, and is advantageous in its simultaneous measurement. Though it has the disadvantage in necessity of designing a precise frequency-dependent filter, complex circuit scale, and extreme difficulty for supporting multiple channels when exceeding a certain scale, it still is a light modulation technology with good prospects.

On the other hand, CDMA (Code Division Multiple Access), that is, the spread spectrum modulation is one of the most advanced modulation technologies, that is used for the recent mobile phones or GPS of car navigation systems. It is a modulation method that uses random numbers. Though it is rather difficult to understand the essential theory, it has the advantages in less influenced by turbulence light, simultaneous measurement, no big problem for multiple channels, and the actual circuit scale won’t be so large. 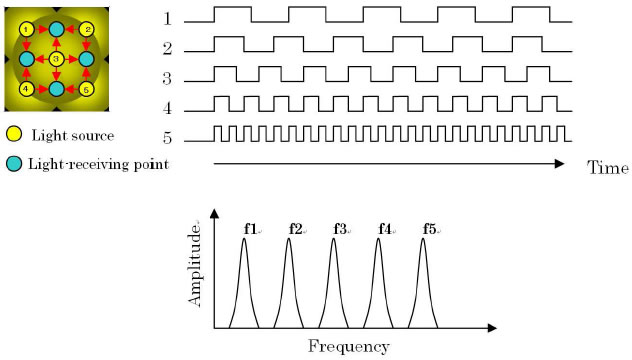 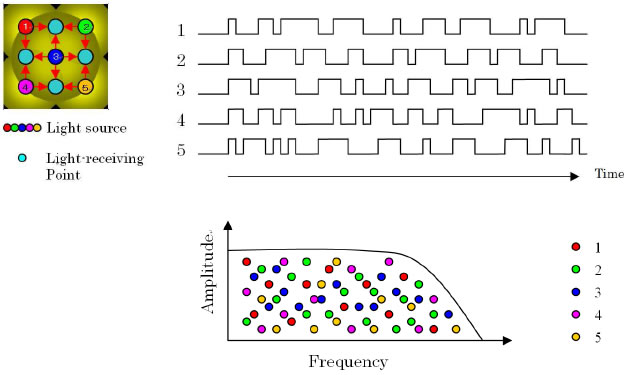 Feature of each method (Use for light measurement)