In order to catch an ultraweak light, the high-sensitivity and high SNR (Signal to Noise Ratio) optical sensor technologies are required. Generally, SNR is decided almost by the optical sensor itself and the performance of the first-stage amplifier mounted immediately after it. For the sensor of Spectratech OEG-16, the SNR is enhanced to the ultimate by the critically-examined parts and mounting method on the orthodox practice. It demonstrates a sufficient performance to measure the hemoglobin (Hb) changes in the frontal lobe.
As for Spectratech OEG-16H, the performance required for the optical sensor became severe much more, and further high-sensitivity and high SNR were required. A significant improvement in SNR was realized by adopting our own super-high SNR technology that had advanced the spread spectrum light modulation circuits and the sensor circuits. As the result, it is improved by 9 dB in SNR or more in spite of its performance being 2 times in gain, and 8 times in speed compared with SpectratechOEG-16. 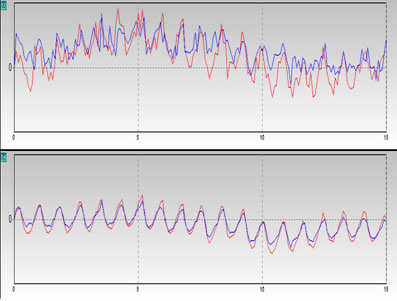 In case of ultrahigh SNR technology not used
(Bandwidth is enough, but SNR is bad)

In case of ultrahigh SNR technology used
(Bandwidth is enough, but SNR is bad)